It was 1935. The limited electricity in the Pacific Northwest’s rural communities was unpredictable, and outages were frequent. The need for customer-owned utilities was becoming clear.

To fight the Great Depression, New Deal projects were funded, including building the Grand Coulee Dam and the Bonneville Dam on the Columbia River, creating more than 3,000 jobs for people who were previously unemployed. Hydropower would soon be a significant source of the region’s electricity.

By 1940, residents of central Lincoln County (Newport and the surrounding area) were tired of not knowing when they’d have power to light their homes, especially at night. Creation of the Central Lincoln People’s Utility District was placed on local ballots, and the measure passed, creating the Central Coast’s first consumer-owned electric utility. Over time, residents of 10 coastal cities, and some unincorporated areas of Coos, Douglas, Lane, and Lincoln counties in a 700-square-mile area voted to join the Central Lincoln PUD.

By 1946, Central Lincoln was buying hydropower from the federally-created Bonneville Power Administration, and as a “preference” customer of the BPA, Central Lincoln is guaranteed 2.176% of the total output of the Federal Columbia River Power System. Today, Central Lincoln provides electricity to 55,000 people, and is the fourth-largest electric utility in Oregon.

Central Lincoln is overseen by five locally-elected board members who are accountable to our customers. Elections for Central Lincoln board seats are held in November of even-numbered years. Unlike some investor-owned electric utilities, our board members are Central Lincoln customers, and they live, work and volunteer here. They are easily reached by phone or email, and their monthly meetings are open to the public. (The Oregon Public Utility Commission oversees the for-profit utilities in the state.)

As a not-for-profit customer-owned electric utility, Central Lincoln doesn’t have investors expecting dividend checks. Our board members carefully consider any rate increase, doing their best to keep rates to a minimum. Central Lincoln recently had a three-year span with no rate increases. 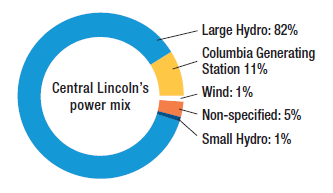 Thanks primarily to low-cost hydropower, the electricity we provide is 95% carbon-free, helping to keep Oregon’s air and water cleaner. BPA officials tell us only a tiny fraction of the electricity the agency sells us comes from coal-fired power plants. In some years, the carbon-free percentage is higher – this depends on what additional power is available when BPA customers need it. Our power is among the cleanest in the United States.