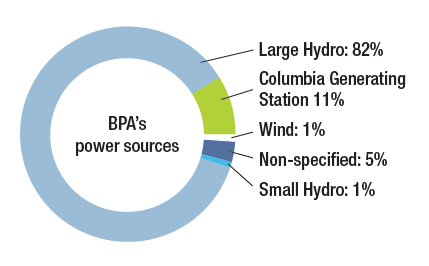 The electricity you use every day is among the cleanest in the country, thanks primarily to hydropower.

U.S. Senator Patty Murray of Washington, and Washington’s Governor Jay Inslee have released a first draft of a study reviewing the possibility of removing the Lower Snake River dams. The Snake River has 15 dams on it, but the lowest four provide power sold by the Bonneville Power Administration (BPA) to many community-owned utilities in the Northwest, including Central Lincoln.

Clean and Renewable
With the ability to cleanly generate enough power for 2.4 million homes, the Lower Snake dams are among the most productive in the BPA’s system of 33 hydro projects. Central Lincoln receives 10% of our power from the Lower Snake River dams.

Costs to Consumers Will Go Up
While the federal government built the dams in the Federal Columbia River Power System, utility customers repaid loans for the dams’ construction with interest. Today, customers pay for the dams’ operation, maintenance, and upgrades through their power bills. If any of these dams are to be torn down, it’s yet to be decided who would pay the cost of removal – or replacement.

“We’ve looked carefully at proposals to remove the Lower Snake dams,” said Central Lincoln’s General Manager Ty Hillebrand. “Conservatively, the cost to our customers would be at least a 5% rate increase, since replacement power would likely have to be purchased on the open market.” And the power supply in the West isn’t keeping up with demand, meaning the price of power could increase due to scarcity.

Hydropower is Highly Dependable
The study looks at spending more than $27 billion to tear down those four dams and replace them with renewables. However, there isn’t another source of renewable energy as reliable or cost-effective as hydropower. Solar power systems stop producing when the sun sets every day, and wind power requires consistent wind – no breezes mean no power generation. The potential removal of these dams, along with the retirement of coal plants in the region, is creating a resource adequacy concern for Northwest utilities.

Fish Assistance Investments are Working
Customers who use BPA power have collectively paid billions for wildlife and fish support, including upstream and downstream fish passage, habitat restoration, and more.

Looking to the Future
Extreme weather events that can cause power shortages, such as the “heat dome” we experienced last summer and icy winter temps are expected to become more frequent. Highly reliable power such as hydropower is crucial to keeping air conditioners on and heat flowing.