Hydropower harnesses moving water to generate electricity. Hydro currently accounts for 37% of the United States’ renewable electricity, but only about 7% of the U.S.’s power. That could change in the years to come, as the nation shifts to more renewable forms of energy, and the Oregon Coast could be the first to ride that electric wave, thanks to PacWave.

Last year, Oregon State University began construction on PacWave South, an $80 million test facility seven miles offshore, southwest of Newport. Funds for the massive project were received from the U.S. Department of Energy, the State of Oregon, and other sources. When completed, PacWave South will be the first commercial-scale, grid-connected wave energy test site in the United States, and it’s expected to be completed next year, with testing to begin in 2024.

“The USDOE’s announcement is an exciting development in the pursuit of producing renewable energy from ocean waves,” said Oregon State University’s Burke Hales, PacWave’s chief scientist and a professor in OSU’s College of Earth, Ocean, and Atmospheric Sciences. “In-water testing at the PacWave site is the bridge from conceptual or scaled-down designs, to operational power production in the open ocean.”

The newly-funded projects will focus on wave energy devices for use in geographically remote areas; converters that can either be connected to or disconnected from electrical infrastructure; research and development related to environmental monitoring; instrumentation systems that operators use to control wave energy converters; and other technologies.

In May, OSU will finish the work it began less than a year ago at the Driftwood Beach State Recreation Site near Seal Rock, closing the park temporarily — it served as the on-shore launching site for undersea boring for the conduits that will route cables to the test site. A construction crew will re-pave and stripe the park’s parking lot and return it to the state parks department “in even better condition than when we borrowed it,” said Dan Hellin, PacWave’s Deputy Director. Visitors will again be able to stop, picnic, watch waves, and access the beach at Driftwood, but they likely won’t be able to see PacWave South, since it will be about seven miles from the beach.

PacWave South will have a maximum capacity of 20 utility-scale wave energy converters, and the ability to test multiple arrays of devices simultaneously. The maximum power generated at the site will be enough to power 8,000 to 18,000 homes a year, and that electricity will be put onto regional infrastructure by Central Lincoln. While a PacWave visitors’ center had been planned initially, designers will place an exhibit at the Hatfield Marine Science Center in Newport, which hosts about 750,000 visitors annually, and is less than 11 miles from the PacWave South site. 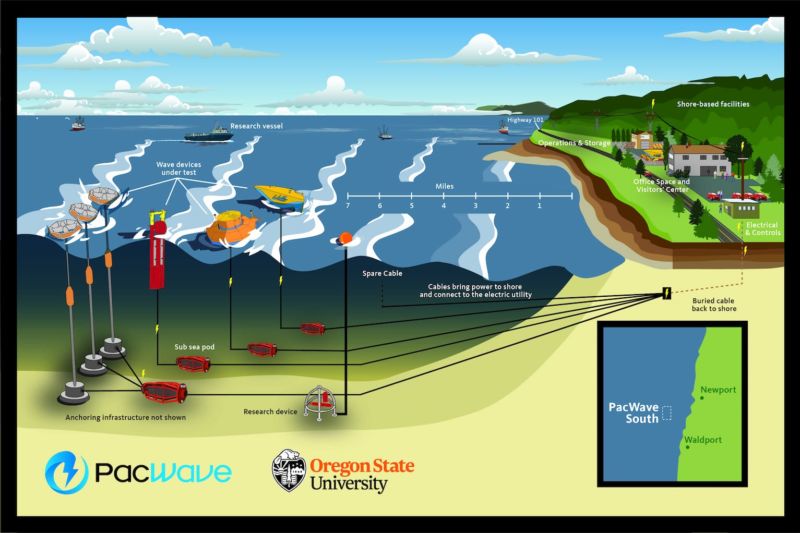