Central Lincoln’s customers are represented by five board members, each elected in a November General Election to a four-year term, each representing approximately 11,000 residents of the Central Coast.

For the first time in 18 years, we have two new board members joining the board at the same time. They have much in common—both recently retired from full-time careers, both have two children (one girl; one boy) and four grandchildren, both are nearly life-long Oregonians, and both attended Oregon State University.

Toledo’s former mayor, Jim Chambers, was elected to serve Central Lincoln’s Subdivision 2, representing Depoe Bay, Lincoln Beach, Otter Rock, Siletz, and Toledo: “My goals for Central Lincoln are to continue to strive to provide cost-efficient service to our customers,” says. “This is a progressive utility, with established goals and five year plan that are reviewed as to progress and needs.” Jim was with Lincoln County’s Public Works Department for 41 years, and shares he was impressed by his interactions with Central Lincoln’s engineers as they sought permits to work on county roads, and with our line crews and tree crews during and after storms.

Paul Davies of Newport will be a familiar face to many Central Lincoln customers – he served as Central Lincoln’s General Manager for 14 years, after working for us in a variety of roles, initially in energy efficiency and conservation. During his 30 years with Central Lincoln, he hadn’t envisioned himself as a board member. But his son followed his dad into a career in the electric utility industry, and their conversations pulled Paul back to Central Lincoln. “Speaking with my son, who works for Central Electric Co-op in Redmond, about BPA power supply contracts piqued my interest in getting involved again in utility business but I didn’t want to work full time,” so he decided to run for Central Lincoln’s board five years after his retiring. What are his concerns as a new board member? “Capital expenditures, rate decisions, and power supply are important conversations to have over the next four years, he says. “Also, legislative decisions made in Salem about constraints with regard to our power supply decisions.” The greater Newport area has about 11,000 residents, comprising Subdivision 1, which Paul now represents. 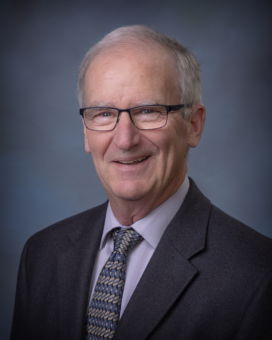 An immediate task for Central Lincoln’s board is hiring a new general manager to lead the utility. Central Lincoln has had just seven permanent general managers in its 79 years in existence. What will Jim and Paul be looking for in the right finalist? “Leadership style working with employees and customers; budget experience and project supervision; vision, planning and problem solving; and personal development,” Jim writes. “Credibility with employees, customers and regional entities; on-the-ground direct contact with customers providing services and dealing with customer concerns; proven record of success over multiple years in the electric utility industry,” Paul adds. “Dealing with and implementing changes in organization and technology.”

What does each new board member do for fun? Jim writes, “I love what the Central Coast has to offer my family. We enjoy boating, fishing, crabbing, clam digging and living in a small community. My hobby, besides my family, is collecting Oregon Centennial tokens (1959).” Paul volunteers with the Newport Police Department. His hobbies include ham radio, playing classical guitar, target practice at a pistol range, and skiing—“I hope to keep skiing until all my grandchildren learn to ski.” he writes.